Getting rather 'browned off' with the grey backcloth for inside use with it being Summer time now so....

The Gregors and I went off in search of a bit of outside background greenery. Unfortunately there are shadows which sometimes fall across their faces but I'm sure that by now you are well familiar with them all and it is their new Summer Dollydoodle outfits that are on show here. 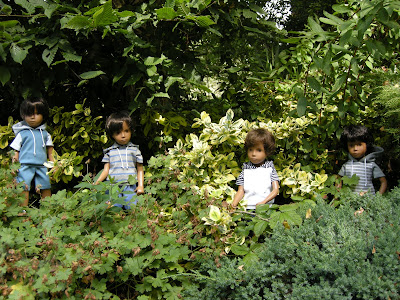 Above are four of my lads enjoying the shady coolness of this shrubbery on this very hot and sunny day.
Below Sam is admiring part of the dry stone wall boardering the driveway that my mother built herself when well into her seventies. 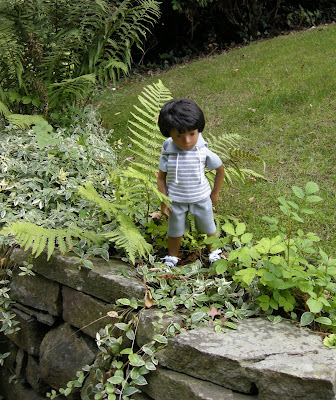 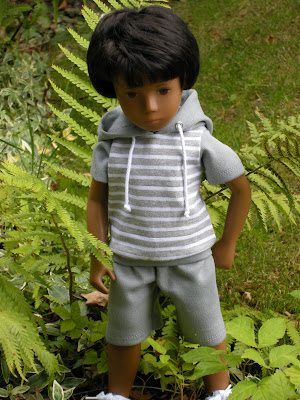 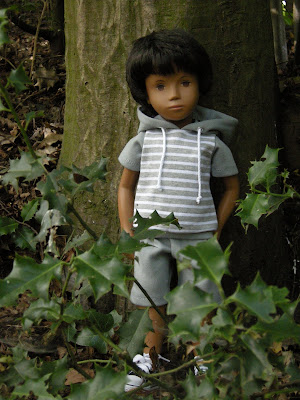 Probably one of my favourite of todays photos. 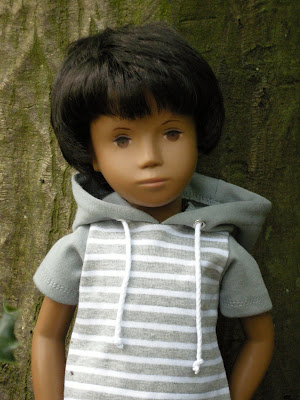 James a 1968/69 Gregor Dark Jeans won off eBay in another of Dollydoodles short sleeved hoodie outfits. Love the blue/grey colours together. 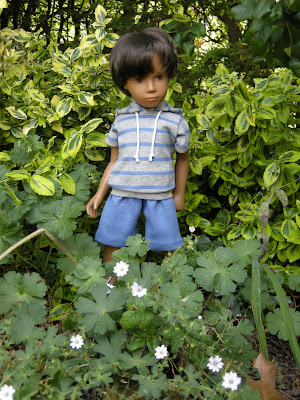 I think that James is a very attractive lad and named after one of my very first boyfriends who was just as handsome... if not more so. 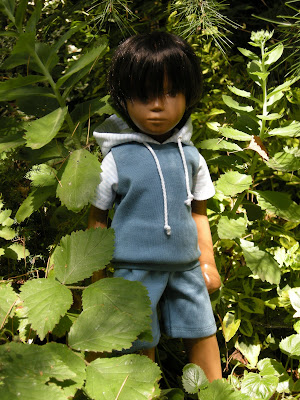 We all love his long fringe although it does always obscure one of his fabulous Shelly eye paintings. 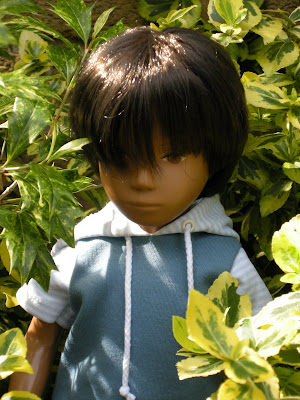 Wondering just how long the front of that hoodie is going to remain immaculately white! 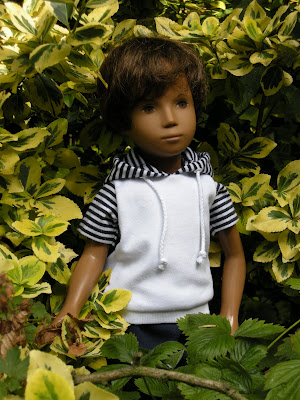 Still looking OK up 'til now! 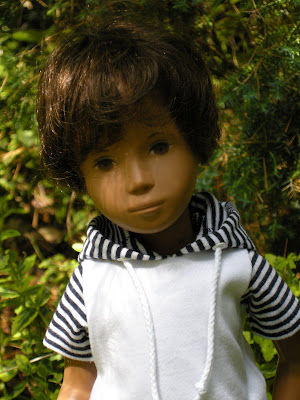 Luke in amongst the Michaelmas Daisies. 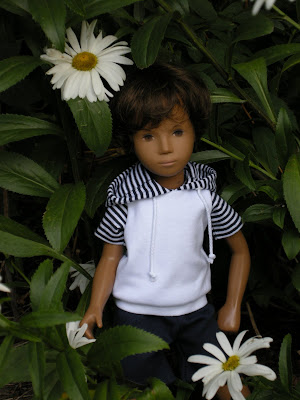 Matt enjoying the shade of the shruberies. 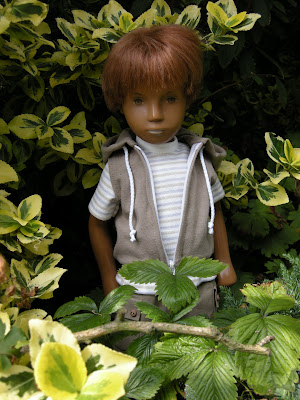 Matt looking a little sad having just been told that he won't be tree climbing today but he can come over another day instead. 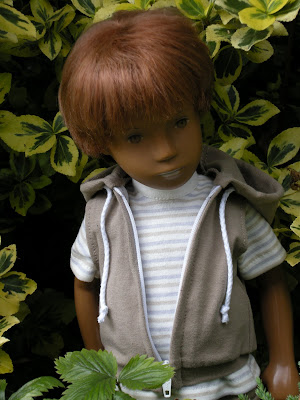 Unfortunately Matt wasn't allowed to tree climb this time as he had his best 'posh' birthday shorts on, a gift from Dollydoodles and I wouldn't have been able to press them so expertly had they had to have been washed as I'm unable to iron. 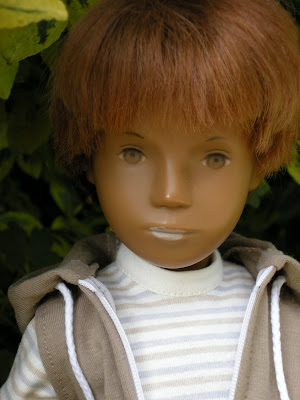 Four of the boys enjoying a bit of free time tree climbing at mine and my sister's property that our mother left to us before returning back to the car to go home. 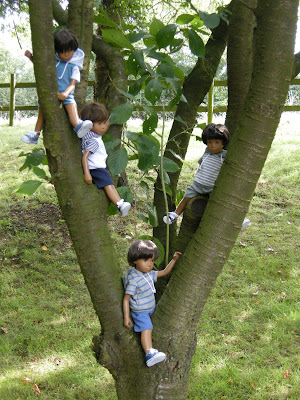 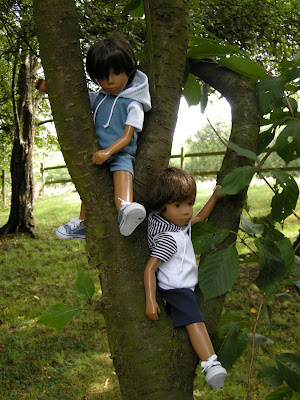 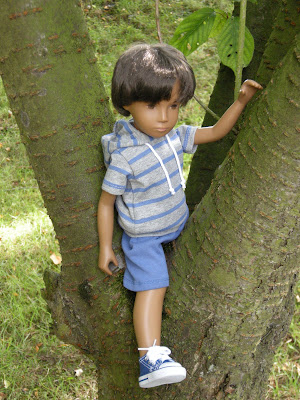 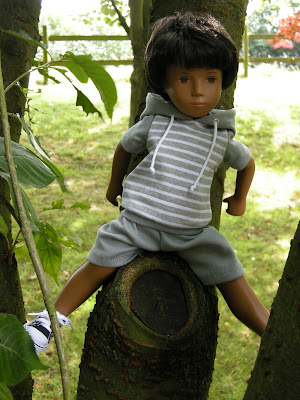 Some of the Sashas girls are hopefully visting here against the greenery tomorrow.
Posted by Kendal at 09:42 7 comments:

....But I thought that with these new three quarter cropped leggings it makes superb PJs for one lucky girl. 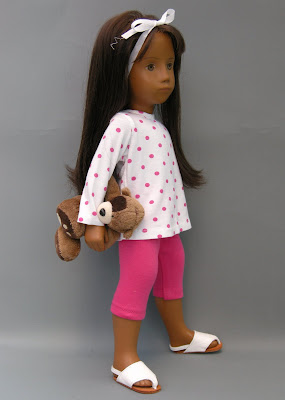 They so suit this 1960s Gotz crude eyed girl (one of my very favourite early Gotz Dolls) with her long straight hair. 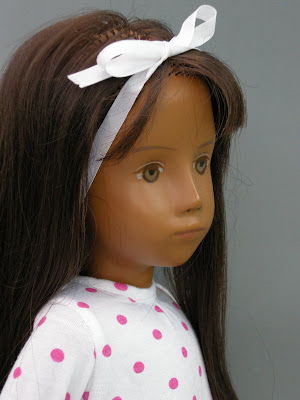 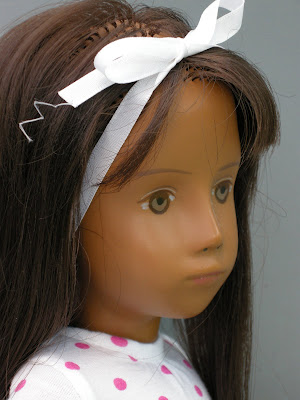